Baba Vanga predictions: The Peacemaker from the East 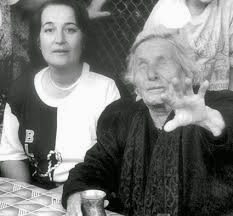 Baba Vanga was a Bulgarian alleged clairvoyant. Vangelia - Baba Vanga, is a true prophetess for Bulgaria, recognized in many other nations, despite the fact that she was blind.

I know two mothers that asked Vanga about Rev. Moon. They were conserned for their children joining  the Unification Church. But Vanga scolded them for being against their own children, and said, "Your children are OK, but you should correct yourself."

In another occasion, the mother got really scared for the daughter wanted to be matched by Rev. Moon and participate in the big International Marriage. Baba Vanga appeared in her dream and told her that this is good and she should be proud. The mother felt it so strong, changed her mind and supported her daughter.

Similarly, when prominent exorcist from Vatican, Archbishop Milingo, met the Unification Church, Jesus appeared to him and told him to receive the  marriage Blessing from Rev. Sun Myung Moon. Jesus told him to work for transforming the Catholic Church - to accept marriage for the Priests. This Archbishop followed Jesus' request and later was imprisoned in Vatican. But now he is leading a big movement of former priests for marriage. More and more high level christian leaders now support Rev. Moon's peace efforts.

God is One - Religions will Unite

Vanga clearly prophecied that, "God is One" and "Religions will Unite." In her predictions the Messiah - the Peacemaker from the East, will bring about this unity and "sign the Eternal Peace." There is no one, but Rev. Moon, whose teachings and work corespond better to that prediction.

As Dr. Moon explained in his Authobioghraphy:

"The sacred texts of religions convey the same or similar teachings more than 70 percent of the time.. This means that most of the teachings of the major world religions are the same at their core. On the surface, some believers wear turbans, some wear prayer beads around their necks, others carry the cross, but they all seek the fundamental truths of the universe and try to understand the will of the Creator.

It is truly tragic that religions, which share the same teachings more than 70 percent of the time, still struggle to understand each other and communicate happily.. Instead, they emphasize their differences and criticize one another. All religions in the world talk about peace and love. Yet they fight each other over peace and love.

Our experience when compiling World Scripture leads us to believe that it is not the religions of the world that are in error but the ways the faiths are taught. Bad teaching of faith brings prejudice, and prejudice leads to conflict" Sun Myung Moon

From the words of Jesus in the Bible we know that the Second Coming, Christ will be born on the earth. That will happen in an Eastern-Oriental country, as predicted in Revelation 12:5.

Baba Vanga's Prophecy: "Christ will Return as a peacemaker" and unify all religions. The only Relligious leader from the East that devoted all his life for the unification of all religions is Rev. San Myung Moon from Korea.

Even Nostrodamus predicted that the Messiah is coming as a new religious leader from the East. As a Peacemaker who will "Unite relligions against the Red (Communism)." Nostradamus even specified that his name will be "Moon". Curiously the meaning of the name is "God's Word". Thus, Bible also comfirms that the Lord of the Second Coming comes with "New Name", and his name will be "Moon" (God's Word).

In fact, the Unification Church which Rev. Moon established in 1945, had quickly spread throughout the world. Unificationism is the only new religion, of our time, that despite the bitter persecution had become a world spread movement with influence in all areas of life. No religion in the world history could achieve that so fast - in just 50 years, while it's founder is still alive. And in fact Rev. Moon's organizations, newspapers and industry had influenced the world more than any other could.

One of the signs of Nostradamus, to recognize the coming Messiah, was that 'he will unite all religions against the Red (Communism)." And this is something that Rev. Moon was most persecuted for - his role in the collapse of the Communist regimes. He united religious leaders from all denominations and faiths to stop the godless, atheistic ideology of Marxsist-Comunism.

Vanga promises that the prophecy in the Bible concerning the Second Coming of Christ will come true. She described him as a peacemaker who comes to our time and "will sign the eternal peace". And peacemaking was the only objective of Rev. Moon; peace with God, peace between mind and body, peaceful families, tribes, nations and world - is what he systematically worked to achieve and set a highway for the whole humanity to achieve.

In Vanga's words God is one and religions will soon find a common purpose and the whole humanity will come to believe one truth. The new religious leader, coming from the East as the Messianic figure to guide humanity towards peace will unite all religions; He will build a world highway with super fast trains, resolving all barriers and resentments by using marriage to promote peace and love where there was hatred. In fact most of what she described him doing can be associated with the Universal Peace Federation and its founder, Rev. Dr. Sun Myung Moon.

WHAT IS UNIQUE ABOUT REV. MOON'S TEACHINGS

WHAT SCHOLARS SAY ABOUT HIS TEACHINGS
CORE TEACHINGS OF UNIFICATION THEOLOGY

Baba Vanga predicted that "Oil will stop and you will discover a new kind of energy," Trains will fly, powered by the sun, "and people will travel huge distances at a very fast speeds. " Oil will stop and the earth will rest." In fact Sun Myung Moon is the one who financed and promoted a project for building a World Highway with super fast trains, which exactly corresponds to Vanga's prophecies.

Is it possible that the Peacemaker in Vanga's prophecy is non other but Rev. Sun Myung Moon? Here is what prominent world leaders say about him: According to H.E. Kenneth D. Kaunda President, Zambia (1964-91), "He has advanced the arts, sports, physical sciences, social services and above all peace in the world." He even calls Rev. Moon, "a prophet of our time." Read his teaching and find for yourself.

"The titles of the organizations that Rev. Moon has founded repeatedly include such words as "world peace," "international" and "unification," reflecting his underlying motivation to establish God’s ideal", points Rev. C. H. Kwak, Universal Peace Federation Chairman. Undoubtedly his work and visions closely correspond to the Messianic personality that Vanga described in her prophecies.

Rev. Moon was called by Jesus
Testimony: Jesus led me to Moon

Meeting their Match by Moon