Baba Vanga prophesied: 44th US president would be black and bring crises 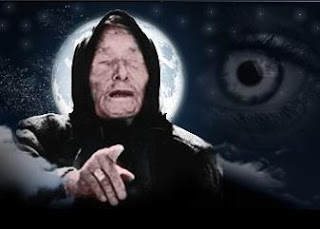 Baba Vanga prophesied: 44th US president would be black and bring crises
Baba Vanga prophesied
According to research Vanga's prophecies are above eighty percent accurate." She was blessed with supernatural abilities for accurate psychic predictions of the future. Becoming blind as a child she was in constant spiritual communications ever since. As I grew up in Bulgaria, so many would go to visit her. She would spiritually see and tell them what will happen or how to heal. Thousands of people visited her personally each day.

Some of the important predictions Vanga made:
Vanga predicted the 9/11 terrorist attacks in the United States, when she said that "the American brothers would fall under attacks of birds of steel". Vanga prophesied the Perestroika in the USSR, and the death of Princess Diana.

She became very popular in Russia since her prophesy about Kursk came true. Vanga prophesied the sinking of the Kursk submarine, "At the turn of the century, in August of 1999 or 2000, Kursk will be covered with water, and the whole world will be weeping over it." (1980) And in August 2000 the Kursk submarine sank in an accident, everyone on board died.

Baba Vanga correctly predicted that the 44th US president would be black. In her prophecy he would be “the last one.” It was not clear in what sense, but we see unprecedented political confusion that started with Obama. For sure the old world started collapsing politically and financially.
COMMENT: First, we will see the highest level of distrust in the political system and the mainstream media, after Obama's presidency. And second, the next president will absolutely have to make a transition to a new system, for the corruption of this one will be exposed to everyone. Thus, he will have to step down for the US Corporation will be declared bankrupt. And the Two Presidents Prophesy will be fulfilled.

Vanga went on, predicting that at the time the 44th president steps into office, there would be a spectacular economic crisis. Everyone will put their hopes in him to end this crises, but the opposite will happen; he will bring the country down and conflicts between north and south states will escalate.
Vanga could spiritually foresee the upcoming collapse of the corrupt economic, banking and political system, starting with the arrival of the 44th president and collapsing completely after him.
Vanga said, "When a black President is elected problems come to the U.S." And we see that on TV now, it truly had happened. The States, and probably the whole world will be thrown in turmoil, confusion, crises, lockdowns, until transition to a new system is made. See, REV. MOON PREDICTED THE CORONAVIRUS JUDGEMENT DAY

Many articles were written about this:


“Vanga predicted a black man to become the 44th U.S. President (after George Bush), and this President will be the last one because America will freeze up or go down in the economics. It probably can divide into the North and South states,” DobryachOk writes.

“Vanga’s prediction sounds like this: when a black President is elected problems come to the U.S.,” an anonymous author says.

“Vanga predicted African American President could lead the U.S. to a miracle and the whole world would win,” nusha states.

“Vanga predicted America would have the crisis and here you are!”

Vanga mentioned the possibility for the situation to escalate to a third world, as we could see in Libya, Syria and the crisis with the refuges. See talked of the danger of a war in which the nuclear bomb could be used again.

Yet, Baba Vanga predicts also a bright responsibilities for the future, "After 2000 there will be no flood, instead we will see peace and prosperity", Vanga said. But humanity must recognize and accept the guidance of this Messianic personality.

Baba Vanga gives few clues which will help us recognize this "Peacemaker" who in her words "will sign the lasting peace". She clearly predicts "a new religion will take the earth by the storm."

Nostradamus also predicts the Messianic figure, as born in the East and bringing the lasting peace. Nostradamus portraits him as "a new religious founder" coming under the name, "Moon".

"Christ will Return as a Peacemaker"

In Baba Vanga's Prophecy: "the prophecy in the Bible concerning the Second Coming of Christ will come true". She described him as a peacemaker who comes to our time and "will sign the eternal peace". "Christ will Return as a peacemaker" and unify all religions.

He will build a world highway with super fast trains, predicts Vanga and remove all barriers and resentments by using marriage to promote peace and love, where there was hatred. In fact most of what Vanga and Nostradamus described him doing can be associated with the Universal Peace Federation and its founder, Rev. Dr. Sun Myung Moon, know for his work to unite all religions and the world as "One Family Under God". He invested much in the project of a World Peace Highway. 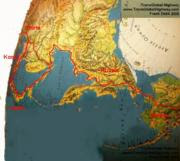 Bering Strait Peace Project: Digging a tunnel as a part of a larger World Highway project proposed by Dr. San Myung Moon at the UN in 2001. World Highway will connect all capitals with super-speed trains ... This will remove the borders and give the same standard of living, would end the ethnic problems.

Humanity must recognize and follow the guidance of this Messianic personality until the year 2012.

"New Religion will take the world by storm"

Vanga predicted the coming of the Second Advent of Christ, "... it is He who again returns to us as was promised." And she mentions that the saints of the spiritual world will inspire all people on earth for the changes he should make on the earth.
"All the apostles are now in motion, all the saints are on the Earth since the time of the Holy Spirit comes." According to her words, obviously this is now. She talks about the emergence of "holy man", (1987). Her prophecies pint to the East and the Korean people. It seems that he has already come, but the changes he will bring will become visible until the year 2012.
Vanga is clear that this person will work to remove the religious divide, which is the cause of many ethnic and religious wars and tensions around the world. Also from her prophecy is clear that he comes as a peacemaker to bring peace to mankind. Or as she puts it, "He who will sign the final contract for the peace of the planet."

God is one and Religions will Unite

In Vanga's words God is one and religions will soon find a common purpose and the whole humanity will come to believe one truth. "Expect changes for the better, religions will unite, peace will be established on earth", people will understand the existence of the spiritual world, prophesies Vanga.

Religions will vanish and humanity will believe in one doctrine, in her words. This will bring humanity together as one family and bring peace and prosperity.


"Humanity will survive many upheavals and many violent events. Will change and people's minds.'ll Come hard times, people will be divided into groups of faith. All religions will one day disappear! Will remain just one teaching."


"Now different religions want to benefit for their selfish strives, but their time is passing. Mankind will shed these chains. Religion will have another task."

Rather than argue and quarrel with each other religions will join hands to build a new and peaceful world by accepting the Messianic person who will come. The Messianic Peacemaker will unite the world in common projects for peace and prosperity. One that Vanga describes vividly is the World Highway making possible for people to travel with fast speed with "trains flying powered by the sun".

Is it possible that the Peacemaker in Vanga's prophecy is non other but Rev. Sun Myung Moon? Dr. Moon he is a new religious leader from the East, who promotes exactly the same Peace Project, for a world highway with super fast trains. His vision is to unite the efforts of humanity for peaceful projects that will overcome the historic barbarians of religion, nationality, race or ethnicity.

Here is what prominent world leaders say about him: According to H.E. Kenneth D. Kaunda President, Zambia (1964-91), "He has advanced the arts, sports, physical sciences, social services and above all peace in the world." He even calls Rev. Moon, "a prophet of our time."

"The titles of the organizations that Rev. Moon has founded repeatedly include such words as "world peace," "international" and "unification," reflecting his underlying motivation to establish God’s ideal", points Rev. C. H. Kwak, Universal Peace Federation Chairman.
Undoubtedly his work and visions closely correspond to the Messianic personality that Vanga described in her prophecies. But what strikes us most, is that many prominent prophesies point to no one else, but Rev. Moon of Korea.

Nostradamus wrote 60 quatrains giving about 40 signs by which to identify this man - the Messianic figure. According to Nostradamus He will suffer great persecution and misunderstanding; He will be repeatedly thrown in jail; He will fly and travel a lot, but wherever he goes he will bless many families.
Nostradamus describes him as a new religious leader - carrier of the new truth for our time. This Peacemaker will be born in the Oriental East, uniting the religions against the Red (Communism).
Nostradamus gives even his name, "Moon", which in Korean means "God's Word" (The Word given by God to men). Until 1991 the world will have heard about him, but people are not going to believe. If we accept him or not by the year 2012 will determine what will follow; a bright future or destructive World War III. Read...
Please help support us. We follow the truth, wherever it leads. paypal.me/worldofheart
Posted by ФЕДЕРАЦИЯ ЗА МИР at 3:16 AM