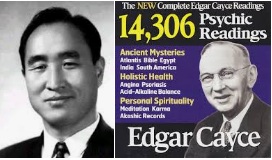 Edgar Cayce learned in spiritual communications, that the so called Armagedon, described in the Bible, is actually a battle fought in the spiritual realms between the soles of light and the soles of darkness, coming into the world.

He was told that in the future time, the soles of the lower realms will be completely prevented from influencing the earth and only soles from higher realms of light will be allowed to help us. Over a time this will result into the forces of good on earth to overcome the forces of evil.

Complete spiritual enlightenment on Earth will occur during the time when only soles from the higher spiritual realms are permitted to cooperate with us. Since the Messiah returns in our time and the era of spiritual enlightenment will renew humanity, and the result will be a lasting Peace - The Kingdom of Heaven on Earth. See also, Predictions 2019

This spiritual shift started in 2012 and now in 2019 we are ending the first 7 year period, where the good spiritual forces are clensing the earth from evil spirit influence. Heung Jin in his message from the spirit world also talked about this:


"Now, as Absolute Good Spirits are descending to the earth, evil spirits are loosing their ground upon which to be active. No one can be misled once all five spiritual senses are completely open, but this will be possible only after the evil spirits are cleared out completely and the person is united with the heart of God and True Parents." Heung Jin Nim, Message from Spirit World

Thelepaty will be thought in schools

According to Edgar Cayce, spiritual communication will become a normal subject thought in schools throughout the world. Ask yourselves, if you live forever what should be your attitude. If our life in the spirit world is eternal and the life here is only preparation for it, how we should live.

Our first goal in life is to develop our spirit and reach mind and body unity. Next, we are to prepare for the eternal life, by perfecting love in our family. Once we perfect our heart and character we will naturally start to perceive the spiritual reality even with our physical senses, Divine Principle explains:

Spiritual sensibility, in Divine Principle sense, is not about opening out spiritual senses. It is more about the growth of our spirit - reaching mind and body unity. When our spirit matures it has the ability to sense the truth, sense God's heart and the heart of the others etc.


Prosperity Moves in the Pacific Region


"The era of a Pacific civilization is opening, bringing together Western science and Eastern spirituality. The leaders in this new era will be nations like Korea and its Asian neighbors." Peace Loving Global Citizen

North Korea also ended it's cycle of 70 years. Formally founded in 1948 when the United States and the Soviet Union divided control of the peninsula. Thus we could see sudden change in it's course which should be substantialized in 2019. The opening will surely start and expand in the next few years. Countries like Venezuella will have the heavenly pressure to change and open to democracy.


"The world rapidly changes, heavenly fortune is moving in Korea’s direction at an ever-increasing speed... it will be in a position to lead the rest of the world into prosperity and peace"  Peace Loving Global Citizen

Edgar Cayce predicted great things for China. Cayce told a group of people that eventually China would become “the cradle of Christianity, as applied in the lives of men.” -- Edgar Cayce reading 3976-29

Personal application of spiritual principles would become paramount to the Chinese people. Cayce cautioned that it would take a long time to manifest but that it was the country’s destiny: “Yea, it is far off as man counts time, but only a day in the heart of God – for tomorrow China will awake.”

When a 36-old book publisher asked about the destiny of China in 1943,  Cayce promised amazing changes in the country that would lead to more democracy and greater religious freedom. He also suggested that eventually the height of civilization would move from the West to the Chinese people: “And these will progress. For, civilization moves west.” -- Edgar Cayce reading 2834-3

Message from the Spirit World describing the different Regions in the world beyond.

The Cayce readings about the life of Jesus covered the “lost” years never addressed in the Bible. But Cayce also spoke of Jesus’ return in the East:

“What is meant by “the day of the Lord is near at hand”? (A) That as has been promised through the prophets and the sages of old, the time – and half time – has been and is being fulfilled in this day and generation, and that soon there will again appear in the earth that one through whom many will be called to meet those that are preparing the way for His day in the earth. The Lord, then, will come, ‘even as ye have seen him go.’”   -- Edgar Cayce reading 262-49

To find out more read,  PREPARATION FOR THE SECOND COMING OF CHRIST

"Since ancient times, the nations in the East have traditionally been considered to be the three nations of Korea, Japan and China. Among them, Japan throughout its history has worshipped the sun goddess, Amaterasu-omi-kami. Japan entered the period of the Second Advent as a fascist nation and severely persecuted Korean Christianity.74 China at the time of the Second Advent was a hotbed of communism and would become a communist nation. Thus, both nations belonged to Satan’s side. Korea, then, is the nation in the East where Christ will return. Let us examine from the viewpoint of the Principle the various ways in which Korea has become qualified to receive Christ at the Second Advent." SECOND COMING OF CHRIST

The Messiah Returns as Peacemaker and Unifier


The first lesson for six months should be One-One-One- One; Oneness of God, oneness of man's relation, oneness of force, oneness of time, oneness of purpose, Oneness in every effort-Oneness- Oneness!
-- Edgar Cayce Reading 900-429
The Returning Christ is one of the most controversial religious leaders of our century. At the same time he is most widely recognized and respected, by wide variety of representatives from all religions and denominations.

Nostradamus and Vanga, predicted about him as a Peacemaker and Unifier coming under the name Moon. The description resembles closely that of the Korean new Religious leader, Rev. Sun Myung Moon. Even media some times described him as "the prophet of modern times", "peacemaker" and even "the leader who contributed to peace more than anyone else in our century"? See, The Most Successful New Religion

Reincarnation is in fact Returning Resurrection

Two mistakes of the theory of Reincarnation totally visible in that video. First, you see how meaningless love becomes; since children are not your children, parents are not hour parents, only temporal relations, while in fact love relations are eternal and unchanging; Parent-child connection is eternal and unchangeable. So this theory destroys the very core of God's ideal for love, because family is the school of love.

To find out the real meaning of Reincarnation read, RESURRECTION

Second, Reincarnation is based on presumption, because there is a veil and your physical mind does not remember it, so by just short glimpse you believe you had previous life, which is actually the life of some other spirits communicating with you.

The external signs which were wrongly interpreted as reincarnation in the past, are actually returning resurrection of ancestors and other related spirits with common base with you. They come to grow, by cooperating with you. They can be thousands, millions, but you are not them. They can help you or drug you down with their fallen natures, but it's all for your growth and if you succeed you will help them grow.

renewable resources and energy conservation, we will see this next prophecy come to pass in our lifetimes.

“You will have before you the gasless motor invented by [4666].
“Edgar Cayce: Yes, we have the body and enquiring mind of [4666], also the associations and those conditions surrounding the perfection of motor which will develop power in its own action. As has been given, the idea and the plans as have been worked out in part along those lines that pull more of the power as produced in compression in drum, with the leads made in these forms that gather vibrations from the air as is forced through drum, are, as we find, the better application of the created energy. In the cams [as] have been used too much slack or play is allowed in their rotation. This is in the drum’s head action that these must be shortened in play.
“The connection of [195] and [900] with same – best that these have [4666]’s operations closer under their observations when the completed product is near attained.
“(Q) How may we bring him under our observation? (A) Bring him to … Ohio or N.Y.
“(Q) Is this machine the same as brought to Washington now by Lindbergh? [Charles A. Lindbergh] (A) No. As is here, the [4666] machine would operate on stationary conditions impelling forces; even for now that in gas motors – for, as tested by others, has more to do with that thrown in air and gaining its impelling force from that source. (Q) Would it operate perpetually if perfected? (A) Not perpetually, but once started could be kept in motion by created energy of its own source. Other has to have some source of impellation.”    --  Edgar Cayce reading 4665-1

Holistic Perspective on Heal Your Body

Edgar Cayce's perspective on healing is that we must consider not only the whole physical body, but also include the interpersonal and transpersonal aspects of healing. Cayce insisted that healing is more a spiritual rather then physical matter. We have to acknowledge the source of healing and the consequences of health.

He said the sole does not enter the body until the moment of birth. Spirit is the life essence in everything, but the sole is individual. Now we have so much evidence on a death person being alive in another dimension, observing his body, in near death experiences.

Sleep when tired, eat when hungry. Don't eat when tired or angry. Better take liquid nourishment. Keep yourself slightly alkaline, not to much ascetic. Keep the balance. Virus cannot live and multiply in alkaline body. But worry of what you eat is worse then eat anything.

The less toxicity you have in your body the more your sole and mind gonna flourish, your cells are gonna be happy and healthy. Movements, exercises, breathing are all important. So that the 4 systems of liberating toxins can work well.
This is where the spiritual qualities of the caregivers come into play. Through the application of the "fruits of the spirit," the sufferer may be awakened to the possibilities of living. Gentleness, kindness, patience, and persistence are powerful interventions which touch the spiritual essence of everyone, regardless of the state of health. The spiritual dimension of the applications was strongly emphasized in these cases. One can sense Cayce's transpersonal perspective in these instances - the unconscious (or "soul forces") would have to be stimulated to regenerate the physical body. Without such a response from the "divine within self," recovery was impossible. . .
Posted by ФЕДЕРАЦИЯ ЗА МИР at 4:44 PM